Boohwal is a legendary rock band originating from South Korea. Since 1986, they’ve been through tremendous changes in members, in style; they’ve passed through so many challenges that only keep them going and become stronger and better every each day. Click here to check out [ALL MUSIC VIDEOS] of Boohwal over the years.

A lot of foreign fans don’t know how to get Boohwal’s CDs abroad, so please go to the red button on the right side to check out the sites where you can get their CDs abroad – please note that I DO NOT provide links for free downloads.

The “Rock Rock Rock” miniseries that was aired recently, taking the theme of Kim Tae-Won’s life story have drawn a lot of attention to Boohwal both from within Korea and internationally. Click on the correlating [Rock Rock Rock] button on the left to find the details about this drama.

You can find the list of most recent posts in this site on the left-hand side and categories organized below.
Top posts and comments could be found on your right-hand side, as well as monthly archive from March 2010-2011.

[김태원] “Because I Love You” Digital Single

*On-record, this is post number 178 on https://boohwal.wordpress.com and right to this point of one-year anniversary, the blog has been visited over 46,200 times. Thank you for all of your never ending interest in Boohwal.* -겁많은사자, 18 March 2011- 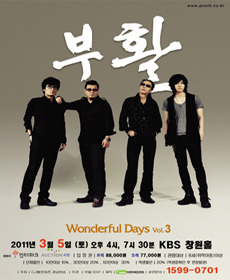 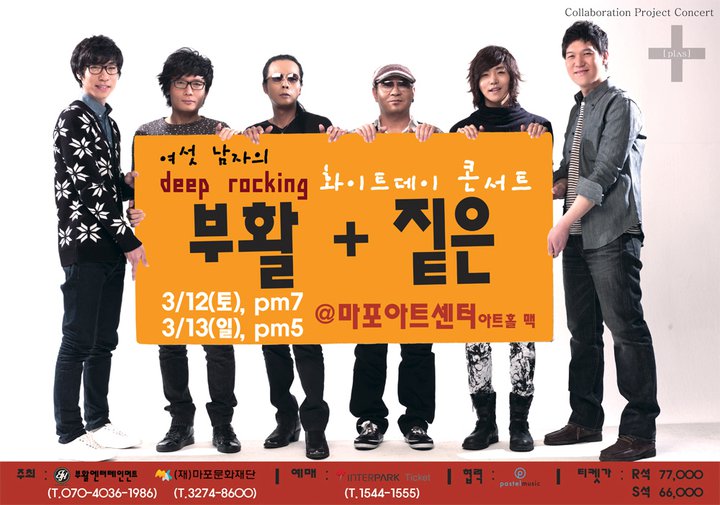 Tonight.. well it’s pass 12 am, so yesterday was likely my last Boohwal concert in Korea coz I’ll be leaving soon enough.

Yesterday concert.. was literally the best… it’s definitely among the ones I’ll remember the most.. (there was my first concerts on March last year, EBS concert on April last year, festival in Ajou University and the Concert on May, the free concert on Namsan NTOK in the summer, Green Plugged also in May, Music Storage on my graduation day in August, TBS Concert in the Dream Forest, their appearance while judging for Office Workers Band .. there are just so many.. and I can still recall the details of each one…) I’ll miss them.. Literally, Boohwal could be the thing I’d miss the most about Korea. It’s been the most colorful year for me.. and all thanks to Boohwal…. 사랑합니다.

Okay… we’ll jump to the concert review now.. First, my seat was spot on, first line. IN FRONT!! I never got front seat before (they’re always sold out within 20 minutes the tickets were opened) but tonight, I was in front. The bassist Seo Jae-Hyuck stood right in front of me. *love love love* ^-^

Originally my seat was one of the purple squares, but latter on I got away with the front seat so I was sitting at the red circle. *A-W-E-S-O-M-E* (really funny that me and my friends came together but we sat separately tho^^;)

The concert started with Yozoh’s performance. I didn’t know any of her songs and I didn’t like any of her videos I found on youtube but Live, she’s different. She’s amazing. She has a nice color, and her music is the kind you’d hear when you just feel like relaxing. And the idea is also refreshing, I like the lyrics^^ Also, I loooove the guy who plays percussion for her~My eyes were mostly transfixed on him almost all the time: both because he’s awesome and he’s right in front of me ^^

The ambiance was very quiet though when she was on stage, I think that’s because she’s quite awkward (^^;) and also because of her music style. Jeong Dong-Ha came to sing duet for her song titled “우리는 선처럼 가만히 누워” (Let’s stay still lying down) – it was really eye-opening. Honestly, I’ve kinda started to take Dongha Oppa’s voice for granted coz I’m just soo used to it coz I always watch Boohwal live all the time. But his voice was really different – very.. soothing…  in this duet. Love it! And then they sung “Falling Slowly” in duet. Yozoh’s concert continues… She sings a lot of her own songs (which I heard for the first time) and one remake song from Boohwal’s 5th album titled “또 다른 미로” (Yet Another Labyrinth).

Next in line is the guest of the night, Park Wan Gyu, the first partner in this collaboration project^^ He sang “사랑한 후에” (After loving you), followed by “비밀” (Secret) in collaboration with Boohwal… and of course, followed with “Lonely Night” which he sung together with Jeong Dong-Ha^^

Follows was Boohwal’s concert.. they continued with 사랑해서 사랑해서 (Because I Love You), which was followed by introduction. I cut my recording here coz I worried they’d run out of  battery s0 I couldn’t exactly recall the titles of each songs.. T_T

They followed with 소나기 (Rain Shower), 생각이나 (Thought), 가능성 (Possibility) – with Yozoh, and my recording was cut again… -_-; Among other they sang (not in order) 사랑 (Love), a combined solo bass-drum-guitar which I missed recording (tell me how much I hate myself..), 사랑할수록 (The More I Love), 21C 불경기, 추억이면 (A Different Lane of Memory), and my friends.. who were sitting on the purple squares I told you previously were spotted by Seo Jae-Hyuck. How much I wished I was sitting next to her, yet also felt glad it wasn’t me on the spotlight.. lol ^^ Anyways… they continued with 너뿐이야 (Only You), 1970, Someday, and 비와 당신의 이야기” (The Story of You and the Rain) as the last songs.

They sung “회상 III” (Reminiscence III) and [“희야”(Heeya) – with Yozoh] for the first call for anchor, and “Never Ending Story” for the final anchor.

Ow, btw, if you follow [Star Audition] 위대한 탄생… I know who the 4 guys Kim Tae-Won chose to mentor already. And I must say… I figure.. except for one person unseen in the concert tonight.. I was kinda rooting for him besides from the guy I saw today. Niweis~ ^^

Following the first line of Wonderful Days Vol.3 this year in Daegu, Boohwal is having a concert in Jeonju this February.

Happy New Year everyone!!! Boohwal will continue with their National Tour Concert this year, and Daegu’s got the honor of the first visit~ ^_^