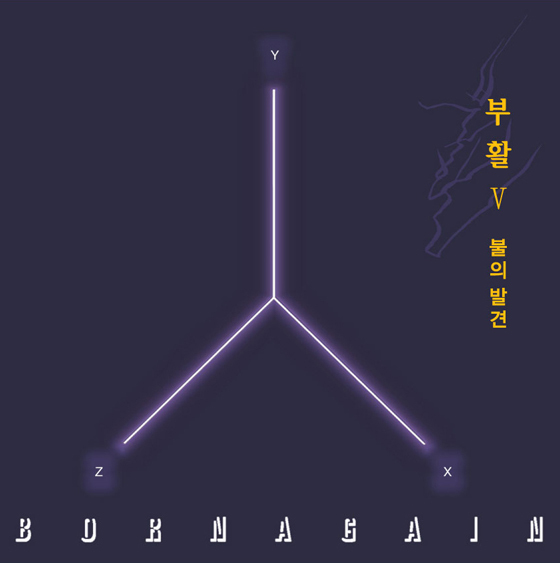 Boohwal’s 5t album {불의 발견] Discovery of Fire, originally released in 1997. This album was recently re-produced, and may I say, with difficulty, after 14 years.

The image you see on the left is actually the new edition – the original one has the letters “부활 V 불의 발견” is white (or silver). Another different thing about this new edition is that, a special bonus track is inserted, no other than “Secret” (비밀) which was the first Collaboration Project Boohwal made with the original vocal for this 5th album, 박완규 (Park Wan-Gyu).

Of course, additional pages are also inserted in dedication to the Collaboration Song “Secret”, which hit the first place in many music charts in Korea as it was released~ this is important, coz the original Boohwal 5th album didn’t have anything to do with neither bassist Seo Jae-Hyuck nor drummer Chae-Jemin, who respectively joined Boohwal with the release of the 7th and 6th album.

guitarist Kim Tae Won, and vocalist Park Wan-Gyu. I got the picture on the right side from one Korean blogger, but it didn’t pin-point who’s who. Surely the guy in the center was Park Wan Gyu and Kim TaeWon’s on top-right. And 2 of the rest 3 have got to be Jeong Jun-Gyo and Jeong Dong-Cheol. Not sure who the 5th person is, but my guess is 최승찬 (Choi Seung-Chan) who used to play session on the keyboard for Boohwal from the 4th to 6th album.

This 5th album contains the songs:

Personally, I find this album simply awesome. If you’re interested to hear a different color of Boohwal’s music, this 5th album will not disappoint you. For fans of hard-rock, I’d recommend 믿음 (belief). And 불의 발견 [Discovery of Fire] trilogy will present you with a strong instrumental synergy~ 🙂

In additional note, please know that the 7th album [Color] is also being re-produced, and will be back in the market from 20 June 2011!! Don’t wait until it’s too late to get yours! 🙂

One Response to “부활 5집 [Discovery of Fire]”